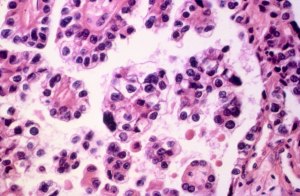 I was channel-surfing tonight after all that riveting newly-elected Pope Francis coverage on CNN, and landed on Katie Couric’s talk show.  The former CBS News anchor was focusing on lesser-known cancers and cancer prevention.

And why not? Katie’s husband, TV producer Jay Monahan, died at age 42 from a highly curable disease if caught early:  colorectal cancer.

She became a widowed advocate, spreading the word on symptoms of this rarely-mentioned (so embarrassing) disease, and even fearlessly broadcasting her own colonoscopy on NBC’s “Today Show.”  Katie’s now – as I call it – the “pretty face“ of colorectal cancer awareness.

Katie’s show intrigued me by her showcasing of what I call “ugly step-sister” cancers: ones that don’t have sexy or ‘pretty-in-pink’ awareness campaigns, like breast cancer.  Think uterine, endometrial, oral, cervical/HPV,  colon, and ovarian cancers.  As a TV journalist I liked doing breast cancer stories best: they were easy to cover and so visual with their highly publicized fund-raising walks, pink ribbons, fascinating mammogram machines, well-known spokeswomen, and compassionate well-spoken survivors.

The other cancers, those “ugly step-sisters?”  I barely gave them a thought.  How do you cover such cancer stories for the 5 ‘o clock news?  What’s the video for families getting ready for dinner?  When I worked as a nurse’s aide in a county hospital at age 18, I gagged changing colonoscopy bags of cancer patients.  I wore a perfume-scented mask (instructed by the staff) to cover the overwhelming smell of decaying flesh while I cared for a young dying woman riddled with cancer that began in her uterus, metastasizing through the rest of her body.  Endometrial cancer?  Who wants dinner-table conversation about blood spotting, defective linings, and dreaded radical surgeries like radical hysterectomies, not to mention chemo and radiation for so many?  And by the way, any volunteers to be “The Pretty Face” of such diseases?  Didn’t think so, at least not back then…

Yet those “ugly step-sister” cancers are devastating.  When cosmetics queen Evelyn Lauder died last year, I wrote a post, “Cancer Competition,” noting the irony that Lauder – “The Pretty Face” of breast-cancer awareness and campaigns – died of ovarian cancer.  Might her outcome have been different if awareness campaigns and fund-raising had been targeted at this sinister, silent cancer – the one that killed her?

Katie Couric did a huge service by airing this topic tonight, and so thoughtfully.  The good news: today there are “Pretty Faces” to champion some of these ugly step-sister cancers. Olympian Shannon Miller for ovarian cancer.  Actress Fran Drescher for uterine cancer.  Blythe Danner – mother of actress Gwyneth Paltrow – for her husband’s HPV-caused oral cancer.  Along with Katie Couric, actress Meryl Streep will be “The Face” of  a colorectal cancer awareness campaign.

It’s too bad it takes movie stars, athletes, and their “pretty faces” to grab our attention and loosen our pocketbooks to become aware and help combat such ugly cancers, but so be it.  They’re using their celebrity for [social] good, and hopefully saving lives as well.  So thank you, all you radiant faces shining hope on these ugly, deadly diseases…

© 2019 Helen Holter – All Rights Reserved. No photos, videos, or content may be used without prior written permission.